I am Pinank Solanki, an undergrad at Indian Institute of Technology (IIT) Mandi, India. I worked with the MetaBrainz Foundation on one of its projects, as part of the Google Summer of Code 2017 over the last summer. It was one of the best and exciting summers I ever had.

Let me begin from the beginning. I first came to know about MusicBrainz in January and first contacted the community in February and was immediately hooked. Initially I decided to make a proposal for addition of book reviews for CritiqueBrianz, but it was not possible because the BookBrainz web service was unstable and the CritiqueBrainz’s host didn’t have direct access to BookBrainz database. So I tried to pitch my own ideas. But then, in one of the weekly meetings, I saw great support and enthusiasm among the community members for rating system for reviews —and I personally liked the idea of the project and thought it would be a great addition to CritiqueBrainz. I submitted my proposal, got accepted and a treat to the friends was due!

The aim of the project was to add support for three types of reviews: text, rating, text+rating (CB supported only-text reviews).

The schema changes and data-access functions are completed and merged. The frontend part is mainly completed including the fundamental functionality along with additional features. It took a lot of time to select and modify the rating input plugin perfectly satisfying the project’s needs. There is still some work to be done, most of which is based on the rating scale conversion in db package. Similarly, most of the web service part is completed and is held up due to the rating scale conversion PR.

The schema changes done are quite different than what was mentioned in the proposal. My mentor for the project, Roman Tsukanov (Gentlecat), recommended some changes which would make keeping track of revisions a lot easier. You can see the schema here and the PR here.

By the time I started working on the project, CB has migrated off the ORM. So, I wrote raw SQL queries and its tests. See the PR here. The rating scale was decided to be 1-5 but for storage a scale of 0-100 is used just like MusicBrainz keeping the possibility of migration of ratings from MB to CB in mind (more info at CB-245). This part is covered in the PR here.

This plugin is used for rendering the rating star icons. The code can be seen in this PR. See the images below to get a good idea about the implementation. 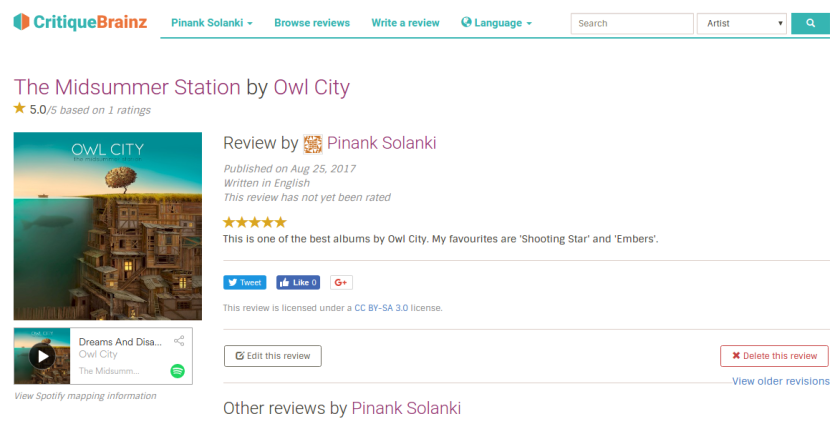 All the functionalities added to CritiqueBrainz had to be implemented in the web service (API) as well. All three types of reviews and other features are now supported via the web service. See the PR here.

The chief part of the documentation was to update the schema. Other than that, rating parameter and several notes were added to the API documentation. See the PR here.

Other PRs relevant to the project can be found here.

First of all, I will complete the leftover work. Web service and frontend PRs are dependent on the rating scale PR. Once it gets merged, it’s 2–3 days of work to complete the rest.

Other than that, I look forward to keep contributing to CritiqueBrainz and other MetaBrainz projects. I am sure many interesting ideas will be discussed at the annual MetaBrainz Summit in Barcelona.

It was quite an eventful summer and GSoC was the biggest of them. Thanks to Roman for his constant help and guidance over the entire summer and also to all the other community members. It was so cool to work on an open-source project and I would definitely suggest for any music and data lover to explore the MetaBrainz projects.