I am Ansh Goyal (ansh on IRC), an undergraduate student from the Birla Institute of Technology and Science (BITS), Pilani, India. This summer, I participated in Google Summer of Code and introduced a new feature, CritiqueBrainz reviews for BookBrainz entities.

I was mentored by Alastair Porter (alastairp on IRC) and Nicolas Pelletier (monkey on IRC) during this period. This post summarizes my contributions made for this project and my experiences throughout the journey.

Book reviews are a glimpse into a world you may or may not choose to enter. Reviews give books greater visibility and a greater chance of getting found by more readers. BookBrainz and CritiqueBrainz should enable users to rate and write reviews directly through the website using the CritiqueBrainz API.

For GSoC ’22, I made a proposal that aimed at adding CritiqueBrainz reviews for BookBrainz entities.

During the community bonding period, my mentors, Alastair Porter and Nicolas Pelletier, helped me create a streamlined pathway to move along with the project. We also worked on various tickets like CB-433, CB-434, and CB-410 and added multiple features.

So we decided first to complete reviewing BookBrainz edition groups thoroughly from CritiqueBrainz as well as BookBrainz, and then extend the project for all other entities like literary work, author, and Series.

We discussed the various database and structural changes involved in the project, like adding BookBrainz Database in CritiqueBrainz, adding tables in BookBrainz DB, etc., the page designs and overall improvements.

The coding period starts with importing the BB database in CB to fetch the required information and perform tests.

Now that the database was set up and ready for us to work on, it was time to write SQL queries for fetching the edition groups and all the other associated information, like identifiers and relationships. I made the code reusable to prevent duplication while fetching data for different entity types. So I opened a PR for it.

So now it was the time to allow users to review an edition group in CritiqueBrainz. For this, I made a few changes in the database, allowed BB entity types, and then added pages for their reviews in this PR. Then I worked on showing the information fetched from the BookBrainz database to the users on their entity pages.

Then to allow users to search edition groups, I worked on adding an option to search BB entities with the help of the search API already present in BB. This feature was implemented in this PR.

After adding support for Edition Groups, it was time to add support for other entity types. This expansion was very smooth because of the reusable components created by then. So I added support for Literary Works, Authors and Series. Later we discovered that the series items were not being ordered correctly, so this was fixed in #460.

During this process, my mentors and I discovered some improvements and refactoring, which were done in #445,  #451 and #456. 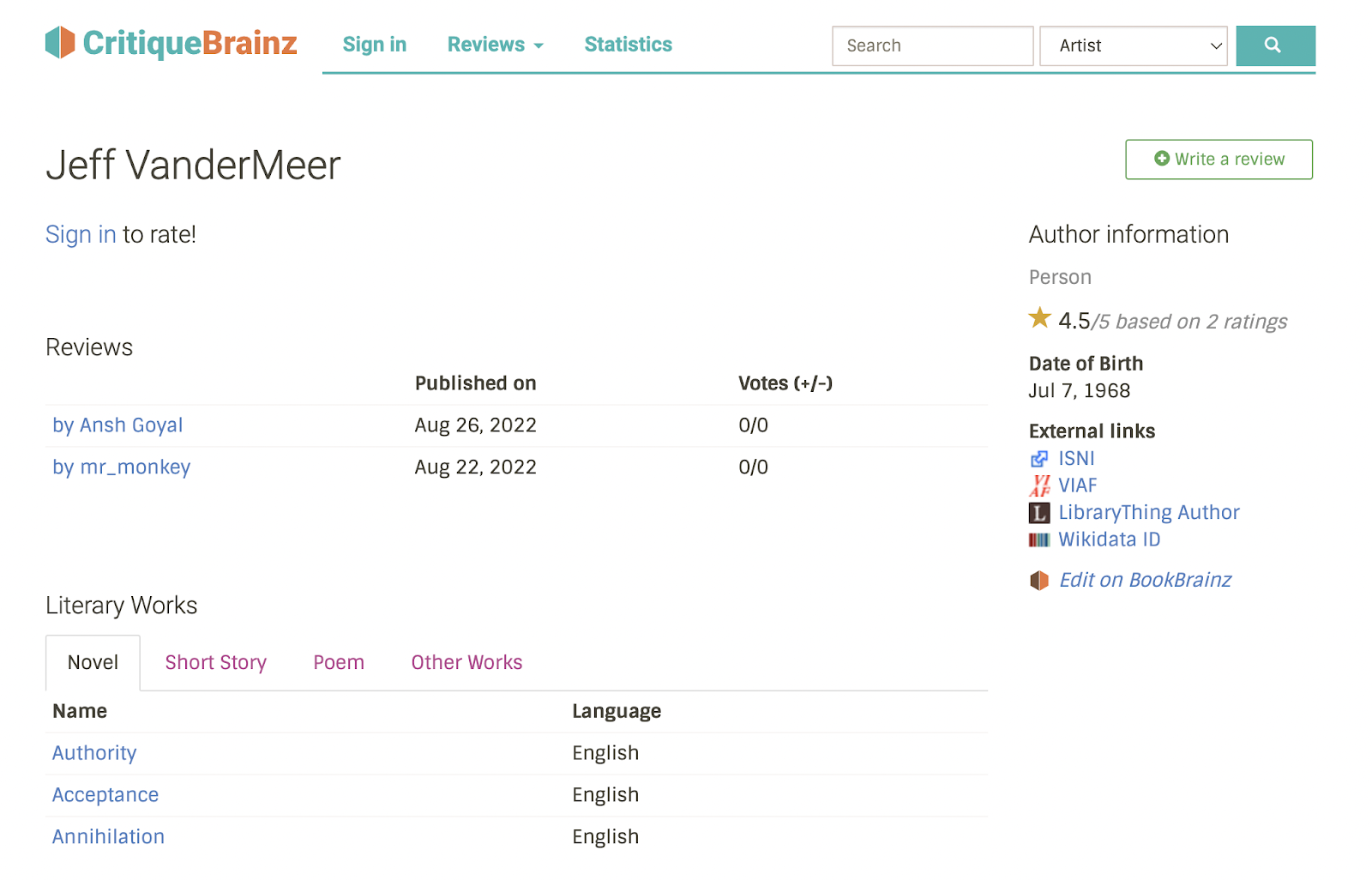 While enabling CritiqueBrainz to review entities, I was also working on BookBrainz to allow users to view reviews and ratings and post them from  the entity’s page.

So I started adding support to fetch and display reviews and ratings for edition groups which involved creating a route which would handle getting and pushing reviews to CritiqueBrainz.

After this step, it was time to connect BookBrainz with CritiqueBrainz. This involved authentication using OAuth login. To add this feature, I first added a table ‘external_service_oauth’ in the database and then in the ORM.

Then I added routes to allow user login to CritiqueBrainz, handled the callback, and saved the tokens in the database. After that, the next thing was to allow users to post reviews from the entity page. For that, I create a modal similar to the one in ListenBrainz (to maintain consistency). 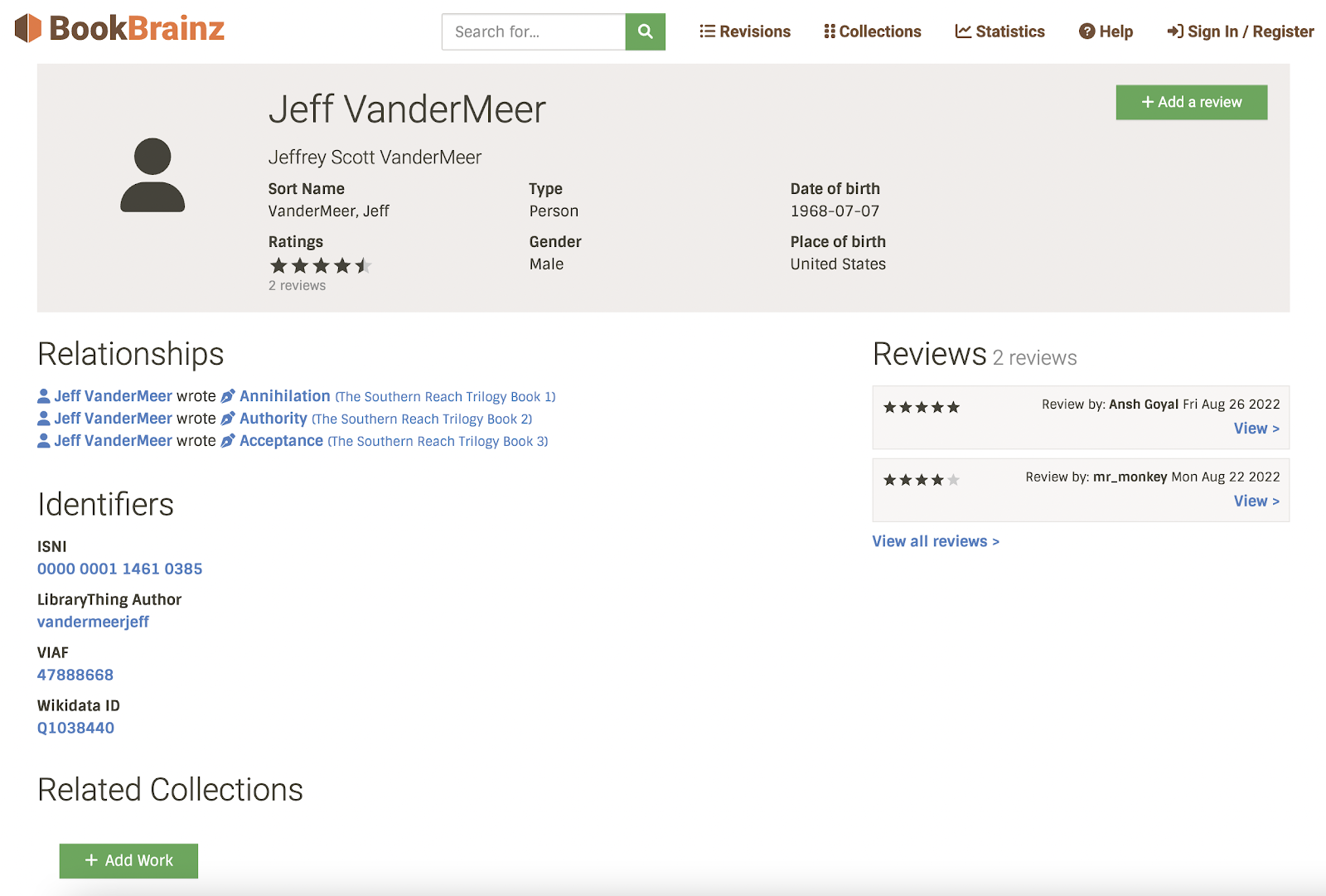 After completing my project, I began working on my stretch goals and starting with unifying reviews for entities common in both BookBrainz and MusicBrainz databases. We decided that if an entity exists in both databases, we show the reviews for all the entities on the entity page (PR).

I am incredibly grateful to my mentors for their constant guidance and support throughout my project. I learned a lot of technical concepts and improved the quality of my code during this journey. I had a wonderful time interacting with the amazing folks at MetaBrainz and exchanging valuable thoughts during our weekly meetings.

I would love to thank Google and the MetaBrainz Foundation for providing me with this great opportunity!

This site uses Akismet to reduce spam. Learn how your comment data is processed.